The story of Irish money is not a simple one. It is inexplicably linked to our political history and our sometimes tumultuous relationship with our English and European neighbours.

The fact is that our money has never really been our own...

It’s interesting to look at a country’s history from the perspective of its currency. It becomes more than just a record of how goods and services were paid for. Ireland's changing currency tells a detailed story of oppression, entrepreneurship, cultural diversity and international partnerships. It also hints, in no small way,  at the egos of those in control and the hearts of those fighting for change.

“The earliest coinage which affected the North West of Europe was the Macedonian coinage of Philip II and Alexander III (the Great). This extensive coinage became the model for many of the crude copies produced by the Celts of Germany, France and Southern England. There is no evidence that the Celts in Ireland struck their own copies of this currency but the English and continental coins are occasionally found in Ireland.”

It is believed that it was the Vikings that hammered out the very first Irish coins in Dublin in the 9th century. Supposedly each Viking coin was worth one penny and was created in theory from a pennyweight of silver. 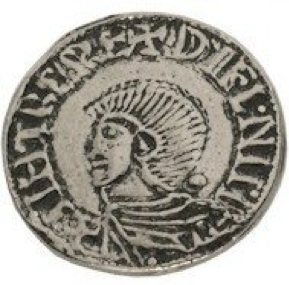 Later, in the twelfth century, under English rule, mints were set up in Kilkenny, Limerick, Waterford, Downpatrick and Carrickfergus to strike new Irish coins including silver half pennies. Coins minted in Ireland were usually a different weight and design to their English counterparts but they all depicted an effigy of the reigning monarch for the time. 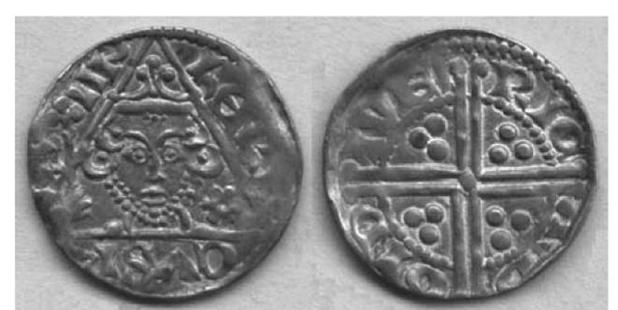 From the fourteenth century on and for over a century and a half, minting In Ireland ceased, most likely due to the European depression. Locally produced forgeries abounded widely during this time.

Coin production was re-established by Edward IV in the late fifteenth century. Multiple denominations were made including one called the ‘groat’ with a fourpence value. These coins were made with less silver allegedly so that they would stop flowing out of the country. Over the next hundred or so years, reigning English monarchs continued to reduce the quality and the amount of silver in the coins they produced for Ireland.

Interestingly it was Henry VIII, in the 16th century that first introduced a selection of Irish coins bearing the harp symbol.

In the 17th century, during the period of the Great Rebellion in Ireland and the English Civil War a number of crudely made local coinages were produced in Ireland, mostly in Dublin. At this time coinage showed little artistry (any old bit of metal was stamped with a date and used to pay troops).

King James II actually issued a copper coinage made from melted down cannons and church bells. This became known as 'gun money'; its face value had no connection to its metal content and it was quickly removed from circulation after 1690. 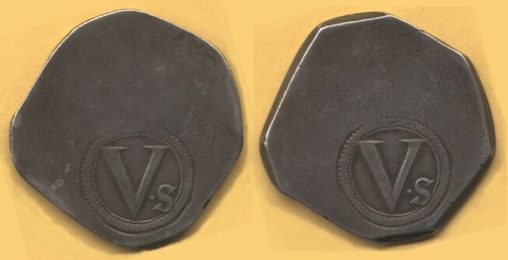 “Irish banknotes appeared as early as 1729. The first of these were issued by the small and often short-lived ‘private’ banks—private in the sense that their shareholders were no more than six in number. But the establishment under statute in 1783 of the Bank of Ireland, a larger joint stock concern loosely modelled on the much earlier Banks of England and of Scotland, opened the modern era of money and banking in Ireland. In return for a substantial loan to the government, not only was the new bank allowed to issue notes, but it was also assured that no other joint stock bank would be allowed to compete.” 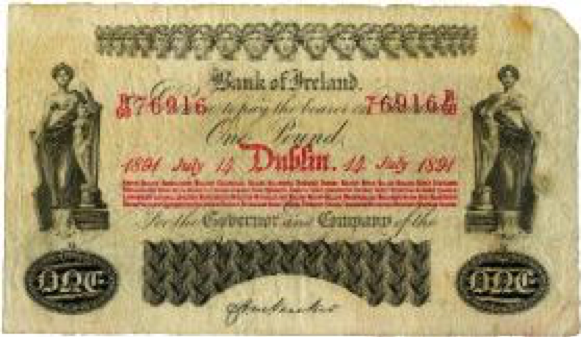 Over the next two hundred years, the quality of Irish coins improved and new metals such as copper and brass were introduced. Some of the coins produced during this time were made by the Royal Mint in London and shipped over to Ireland to be placed in circulation.

These were of a much higher quality than previous issuances.

In 1800 the Act of Union attached Ireland politically to the rest of Britain. By this time, the state of Irelands currency was extremely poor, consisting of a mixture of English, European and Irish produced coins as well as various denominations of tokens and forgeries. The Bank of Ireland tried to alleviate the problems by importing Spanish and South American ‘8 real pieces’ which were a standard global currency at the time but it was to no avail.

In 1826 the Irish ‘currency’ was formally abolished and the Irish pound which had been valued a few pence below the sterling pound was brought into line and ceased to exist as a separate denomination.

From 1826 until the founding of the state, English coins and banknotes (a late 18th century innovation) were circulated for use in Ireland.

In 1928 the Irish Free State began to issue its own currency. However English coins and banknotes continued to circulate freely in Ireland until 1979 when the currencies finally separated.

A range of new Irish banknotes was also introduced. These were designed by the Belfast-born artist Sir John Lavery and featured his rendition of an archetypal 'colleen'. It later transpired that the portrait was of his wife, Hazel, an American painter! 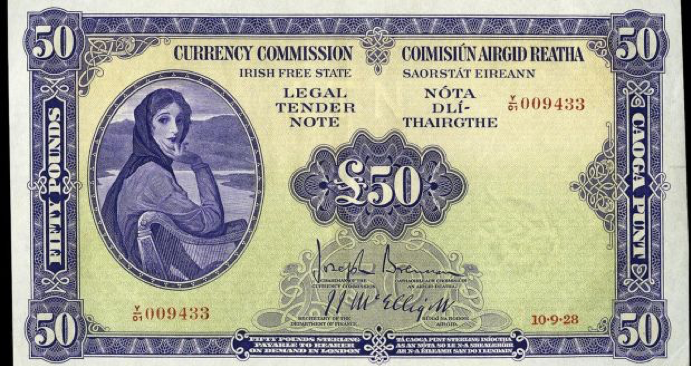 The new Irish currency was pegged to sterling and was originally known as the Saorstát, or Free State, pound. After 1938, it became known simply as the Irish pound or the punt.

“Decimalisation of the currency was discussed during the 1960s. When the British government decided to decimalise its currency, the Irish government followed suit. The legislative basis for decimalisation in the Republic was the Decimal Currency Act, 1969. The number of pence in the Irish pound was redefined from 240 to 100, with the penny symbol changing from "d" to "p". The pound itself was not revalued by this act and therefore pound banknotes were unaffected, although the 10 shilling note was replaced by the 50p coin. The new 5 pence coin correlated with the old 1 shilling coin, and the new 10 pence coin correlated with the old 2 shilling coin. New coins were issued of the same dimensions and materials as the corresponding new British coins. The Decimal Currency Act, 1970 made additional provisions for the changeover not related with the issue of coins.

Decimalisation was overseen by the Irish Decimal Currency Board, created on 12 June 1968. It provided changeover information to the public including a pamphlet called Everyone's Guide to Decimal Currency. The changeover occurred on Decimal Day, 15 February 1971.”

In the 1970s, the European Monetary System was introduced. Ireland decided to join it in 1978, while the United Kingdom stayed out. The European Exchange Rate Mechanism finally broke the one-for-one link that existed between the Irish pound and the pound sterling; by 30 March 1979 an exchange rate was introduced.

To mark the arrival of this fresh dawn for Irish currency, a new range of notes was issued, each featuring a person from history or mythology. Inscriptions were carried in both English and Irish. 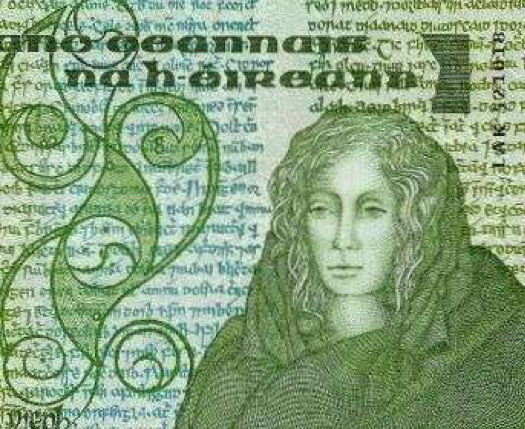 This final series of Irish pound banknotes was to be quite short-lived. Introduced in 1992 it was superseded by the euro on 1 January 1999. Euro currency however, did not begin to circulate until the beginning of 2002. Prior to the changeover, every household in Ireland was issued with an electronic converter and a Euro Handbook. The changeover to Euro went surprisingly smoothly.  An estimated 85% of all public cash dispensers were issuing Euro by the end of the first day and within a week, nearly 90% of cash transactions were being carried out in Euro. Irish pound coins and notes ceased to be legal tender on 9 February 2002. 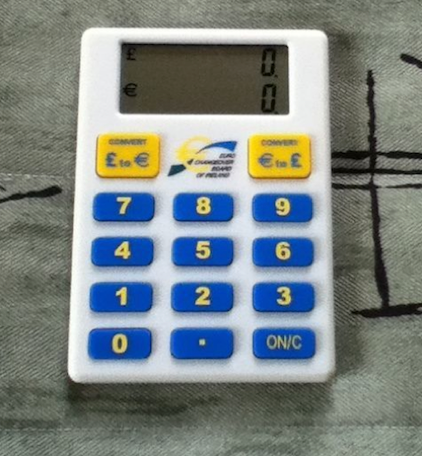 Irish ‘Collectables’, Euro converter for sale on eBay, May 2018

The Euro has now been the official currency of Ireland for almost two decades. Today it is the responsibility of the Central Bank of Ireland to issue euro currency into circulation in accordance with the principles and rules of the Eurosystem.

The Euro is the result of a massive effort to create a stable single currency to promote peace and co-operation between all EU member countries and to help them achieve their common economic goals. Ireland was one of the first 11 countries to adopt the Euro, demonstrating our willingness as a nation to forge mutually beneficial international partnerships.

Back to news listings

Find the right product for your business

Use our simple wizard