Festival goers have been warned to be vigilant after a number of counterfeit notes were discovered in circulation around the Capital.

Forged Clydesdale Bank £20 notes have been collected by city centre traders over the festival period, raising concern over the levels of fake currency in Edinburgh. One of the notes was handed directly to Evening News staff. 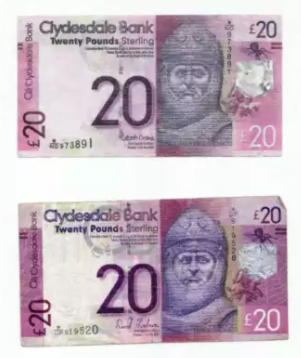 It is understood several businesses close to the High Street – at the heart of Edinburgh’s festival activity – have warned staff to be on the lookout for any customers attempting to use one of the fake notes to try and purchase goods. The fake notes look extremely similar, but the forged versions lack  distinctive watermarks of Robert the Bruce and have a slightly darker purple colour.

Genuine notes have a watermark and a metallic thread in the paper, appearing as silver dashes on the back of the note. When held up to the light, the metallic thread appears as a continuous dark line, while each note also has an individual serial number and fluorescent features, which show up only when under ultraviolet light.

The real notes are also printed on special paper, which feels slightly rough, rather than the smooth forged versions. Other counterfeit notes can feel shiny, limp, oily or waxy when held.

In April, police issued a warning to members of the public following the discovery of a number of fake £50 Bank of Ireland notes being used at retailers across Scotland. Businesses in Fife were also warned to beware of forged notes in circulation in February after a series of counterfeit £20 notes were used at retailers in Glenrothes and Kirkcaldy.

It is a criminal offence for counterfeit notes to be knowingly held or passed on under the 1981 Forgery and Counterfeiting act.

Police Scotland were unable to comment on the counterfeit notes when approached yesterday.