"Fraudsters are spreading counterfeit cash throughout parts of the borough, police have warned."

"Officers from the Leigh, Atherton and Hindley neighbourhood teams revealed they have received multiple reports of fake £20 notes being circulated in the local areas, particularly Hindley and Hindley Green.

Residents have been warned to be on their guard, with independent charity Crimestoppers warning that counterfeiting is not a victimless crime and has severe affects on local communities.

“Use of fake money in the UK has seen retailers, businesses, schools, charities, the elderly and vulnerable conned out of their hard earned cash,” said a statement on the Crimestoppers website.

“Counterfeit notes are manufactured by organised criminal gangs and the proceeds are used to fund other serious activities. In a plea for public assistance, the independent charity added: “Even though genuine banknotes are getting more sophisticated, we are asking for your help to find those making, buying or selling fake notes.” The practice of making fake cash is a criminal offence, as if knowingly being in possession or using it. 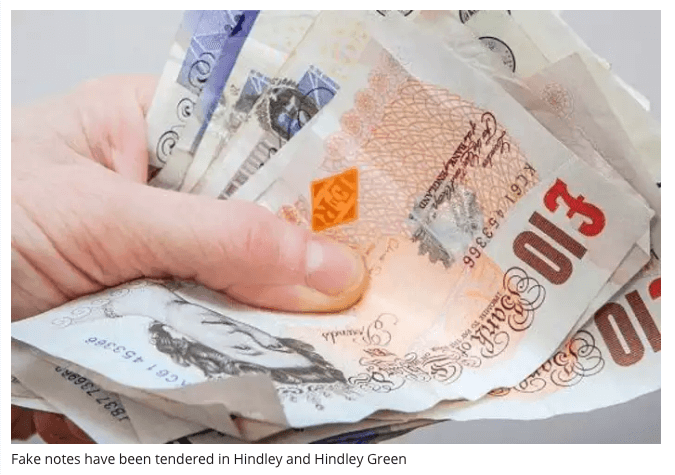 Counterfeiters caught being involved in the trade can face a prison sentence of up to 10 years.

Shocking figures revealed that in the first half of last year, almost a quarter of a million fake banknotes were removed from the UK streets. If they were real, the 237,000 fakes would have been worth £4.88m. The illegal practice is particularly rife around Christmas time, with con artists taking advantage of the festive season by targeting busy shops when more cash is changing hands.