According to reports by The Sun and The Scottish Sun, "Fake Bank of England and Bank of Scotland £20 notes in circulation have caused concern ahead of the busy shopping period this Christmas."

"High street businesses and police forces across the UK have flagged the spike in counterfeit cash online recently. And the concern is that the notes can be more easily fobbed off on unsuspecting cashiers caught up in the hectic Christmas period. The fakes have recently been found up and down Britain, including in Daventry, Birmingham and Greater Manchester. Counterfeit twenties are sold in bulk on the black market for around £8 each and can end up in the wallets of unwitting shoppers after they’re used to illegally buy goods and services." 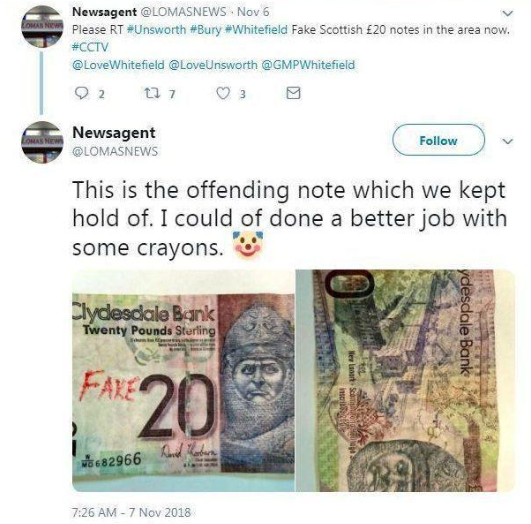 "One black market user told Metro that he spent £400 on £1000 worth of fake £20 notes to make his yearly Christmas shop cheaper. He said: “I will either sell them for a tenner each, or slip them in with real notes when buying Christmas presents. “It is like anything, the trick is not to be greedy or impatient. “I would never walk into a shop and buy a can of pop with a fake £20 but I would slip one in when I am buying something for £100, or if I owe someone gambling money or if I am buying some sniff (cocaine.)" 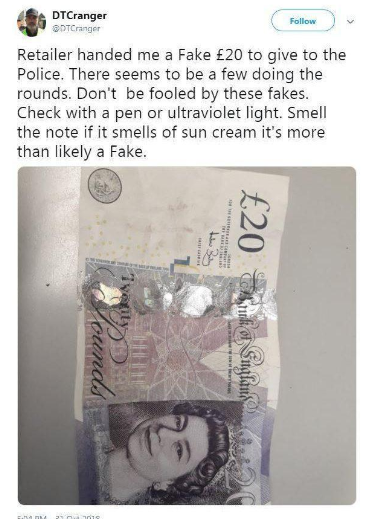 "Although incidents of fakes have been found recently, Bank of England data show that the proportion of counterfeits in circulation remains relatively low.Typically less than 0.05 per cent of banknotes are fake – less than one in every 2,000 notes. And in the first half of 2018, about 223,000 counterfeit Bank of England banknotes with a face value of £5million were taken out of circulation. At any given time, there is an average of 3.7billion real banknotes in circulation with a face value of about £70billion. The National Crime Agency has also addressed the issue of fake notes in its National Strategic Assessment. "Both Scottish and Northern Irish notes have also been targeted. Bank of England notes are most at risk in terms of the total volume of counterfeits. Scottish and Northern Irish notes are most at risk in terms of vulnerability [and] relative volume.”

It read: “Organised crime groups based in the UK continue to be involved in the counterfeiting of Bank of England £20 notes."

In a separate report published by The Mid Sussex Times, "Police received a report of counterfeit notes being used at a takeaway shop in Burgess Hill.

The incident reportedly happened at Cod Father Fish And Chips and New Tim Ley in Lower Church Road on Saturday, November 3. A Sussex Police spokesman told the Middy officers were investigating the incident and that enquiries were ongoing."